Caregivers: Use Your Right Brain, Too!

On Tuesday, we welcomed Benjamin Azevedo, M.D. from New Orléans Bow Ties to our ‘Be A Healthy Caregiver’ show on Blog Talk Radio. To listen to our entire show, simply click here!

Our conversation was more than just about the making of beautiful Bow Ties, our conversation centered on the importance of having an equal balance in life.  Ben recently graduated from Tulane Medical School in New Orleans and will be starting his internship in San Diego later this summer.  Medical school, like any academic disciplines, can be trying, even for the most dedicated students.

Ben has always resonated with the idea that there are two sides to the brain; the left being in charge of linear analytical thinking and focuses, ordered, logical execution while the right is more expansive, creative, and boundless.  During his

first year in medical school, Ben realized that he was letting his left-brain take control of his life and strip it of the art, music, and imagination that his family had fostered throughout his life.  Ben put a conscious effort into letting go of his stress and thrust himself into the exploration of what his right brain had to offer.  Ben first began to cook, to draw, to exercise more and get out into nature.  Then the idea came of creating beautiful Bow Ties, which has become a conversational piece in his work, while allowing his right brain to explore.  Along with his masterful work of creating beautiful bow ties, Ben also recognized the need for Doctors to learn how to communicate good patient care, especially when dealing with difficult end of life issues with patients and their families.    With his attraction to palliative care and hospice, Ben created an elective course at Tulane University teaching the art of communication to medical students.  The course has been well-received by both students and faculty. “This is cutting edge material”, I thought.  We all know there is more to Doctor/Patient, Doctor/Family communication than just reading a chart!   With his communication class, Ben is providing a great tool for medical students, who in most cases, would never have been exposed to such an important learning tool.

As our conversation continued, I was struck by how much I have let my right brain linger.  As a Caregiver, I realized that I am constantly in the left – brain mode; always analyzing, worrying, thinking about the need of my caree, completely focused on his needs rather than my own.    As my weight continues to rise, while my hobbies are put on hold,  my right brain strives to be released from its shackles, to explore, to create to be free again.  I wonder how many caregivers might just feel the same way?  I know I am going to make a conscious effort to be more creative while elimination self imposed stress!

Ben’s terrific example of letting his left brain explore, not only afforded him the opportunity to make beautiful bow ties, it allowed him to go on step further by combining the best of his right and left brain by creating such a meaningful communication class for medical students! 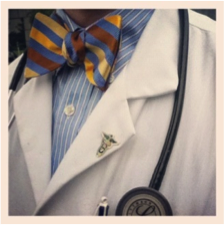 This next time I run into a young physician who provides empathic communication, I will want to ask them if they took Ben’s communication class at Tulane University.   If they are wearing a bow tie, I’ll know it without even asking!

Can’t listen Live?  NO Worries!  All our shows

are  archived for your convenience by clicking

Filed under Caregiving, The Purple Jacket

This site uses Akismet to reduce spam. Learn how your comment data is processed.